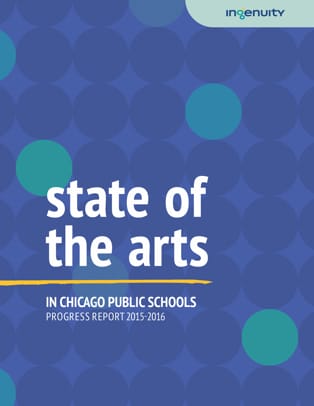 Ingenuity has released its 4th annual State of the Arts in Chicago Public Schools progress report. Data reflect an increase in the number of elementary schools meeting weekly instructional minutes and the number of schools Strong or Excelling in the arts across nearly every network last school year.

These latest findings make it clear that schools have made significant progress in expanding and incorporating arts in the school day over the past four years since CPS put the Arts Education Plan into action.

CPS.edu | Arts Education on the Rise in CPS

What People Are Saying

“We know that exposure to the arts is just as critical as math and sciences to a 21st century education, which is why we launched the district’s first comprehensive arts plan to improve access for students in schools across the city. Since that time, the arts has become a core component of the school day, helping students excel in the studies overall, while providing them the creative outlet that allows them to realize their full potential.”

“The strength of CPS arts education has helped our students channel their creativity and hone their skills to become the next great creators and innovators. Ingenuity’s findings confirm that we are moving in the right direction, and we will continue to seek opportunities to elevate arts education in schools throughout Chicago.”

“In our fourth consecutive year of tracking student access to the arts in Chicago Public Schools, we see encouraging progress city-wide. Six of ten CPS schools is now considered Strong or Excelling in the arts—a significant increase from two years ago. There is still work to be done, but this meaningful progress reaffirms an underlying commitment by many CPS principals to the arts.”